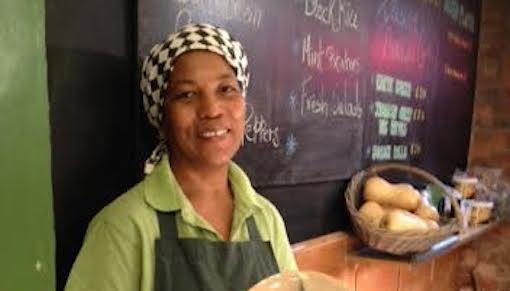 There’s been a warm and welcoming vegan café in our basement since the Buddhist Centre opened here in the mid-nineties. It’s gone through a lot of changes over that time, but for many years now it’s been run as a day-time café and juice bar by our friend Patricia and her son Dexter, with a team of kindly and cheerful part-time workers. Patricia has found though that re-opening really isn’t viable in the current climate and so yet again we have to accept that nothing is permanent and unchanging.

Many of us will have such fond memories of eating delicious wholesome food together after a class, holding informal meetings there, overspilling from large events upstairs as guests of Patricia’s tireless generosity, or just enjoying a quiet and very affordable lunch in friendly surroundings. Some of us have been on retreat with Patricia, meditated with her and simply enjoyed her company. Some will have just enjoyed a baked potato or a freshly prepared juice before a Centre event without even knowing whose kindness was behind its appearance.

Longstanding members of our community will also remember an earlier time, when Earth ran as what’s known as a right-livelihood business, not-for-profit and exemplifying work as spiritual practice. Some of us have worked there and volunteered there. In countless ways, Earth is a major part of our history and also that of the Northern Quarter and the city as a whole.

Its loss is very significant, to Patricia and Dexter of course, but also to our community and more. There’s far more to say and that will follow, but we just wanted to pass on the news before too much time passes