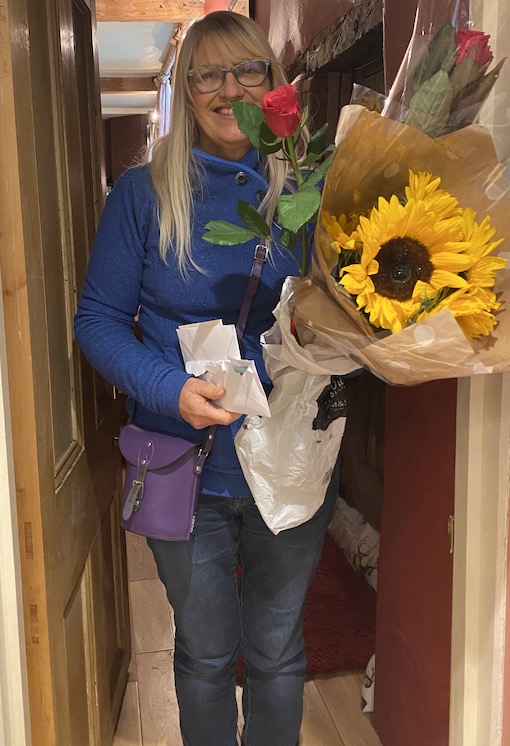 The Kalyana Mitra Ceremony celebrates and marks a life long commitment to being spiritual friends with one another.

We had planned to hold the ceremony out of doors but as it was pouring with rain we had a socially distancing ceremony in Prasadu’s spacious lounge instead.

The friendships between these three fine beings have been developing and deepening over the last thirteen years and have been a really effective way of supporting Gill to deepen her practice of the Dharma and build her connections with the Order. Of course Prasadu and Shakyajata have gained much from the friendship too.

Gill met the Dharma through Prasadu who she works with in the NHS where Gill is a Consultant Paediatrician. Gill lives near Bradford and has been actively involved in our Sangha and also the Hebden Bridge Sangha. She is passionate about the Dharma. It’s made a huge difference to her life. Currently Gill is supporting a Post Mitra Study Group on zoom.

Gill also received her letter inviting her to join the Order on Tuesday! All being well, Covid-wise, Taravandana will be ordaining her at the end of September at Adhisthana in Herefordshire.

Centre is currently closed due to Coronavirus - join us online! We are hoping to partially reopen on 1st September, with some events continuing online beyond that. We used to be open six days a week, including most bank holidays - new opening hours to follow. Charity reg no: 514937