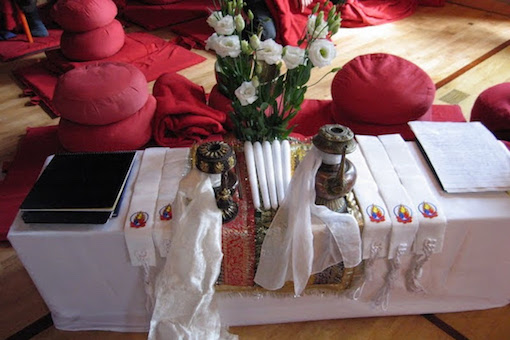 For the Benefit of All Beings, I Accept this Ordination . . .

After many delays and uncertainties, we can now welcome some old friends with new names after their Ordination in the Triratna Buddhist Order. Three of our community were finally ordained in May, with more to come!

On the afternoon of the 4th May at Adhisthana, Triratna’s UK home, Robin Ellis became Moksasari – a Sanskrit name meaning One who is flowing towards freedom in a ceremony with four other women from across the country and Europe.

Then on 23rd May, Kirstine Pearson‘s public ordination at Taraloka women’s retreat centre saw her emerge as Suryasraddha – She whose faith is like the sun. Like Moksasari’s, this journey had not been a straightforward one in its final stages, involving a solitary retreat followed by a small-bubble arrangement in Taraloka’s various buildings.

Also on 23rd May, Barrie Stanhope from Southport became Buddhamaitri – He who has the friendliness of the Buddha – in a rare public ordination in our own Lotus Hall.as part of our Buddha Day celebrations,  with Sangha members witnessing this significant occasion on Zoom.

We’ll be welcoming Moksasari, Suryasraddha and Buddhamaitri back and hearing all about their experiences on 11th June.

Debbie Jones, Claire Morris, Helen Sullivan, Lynne-Marie Eccleston and Sundeep Grewal also have their Ordination arrangements firmed up at last and we’ll be holding a rousing send-off for Debbie on 18th June and then Claire, Helen, Lynne-Marie and Sundeep on the 25th

Let’s Hear it for the Kesa-Makers

And speaking of Ordination, let’s have a shout-out for our kesa-makers – a little-known group of Manchester and Liverpool Sangha members led by Maitrinandi who get together for the exquisite and highly exacting needlework required to produce quite a proportion of the kesas which Order members around the world receive on Ordination and wear as a reference to robes.