Celebrating the Steps on our Spiritual Paths 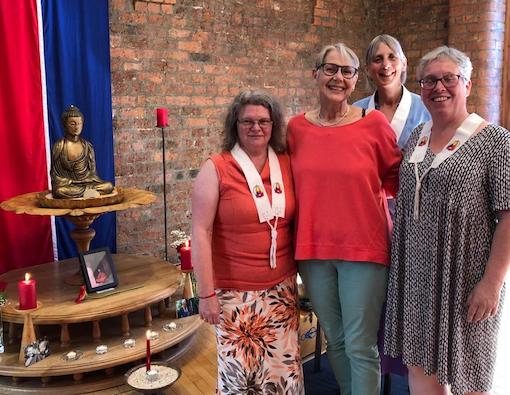 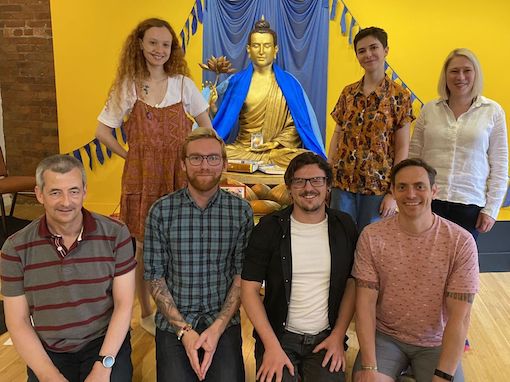 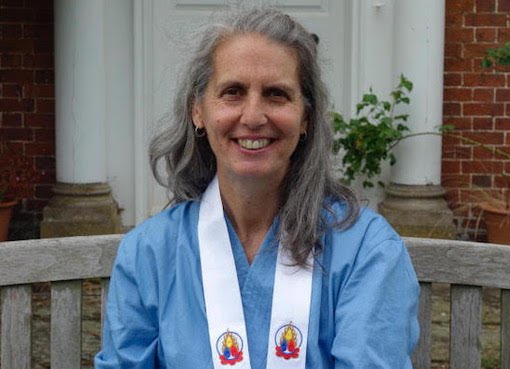 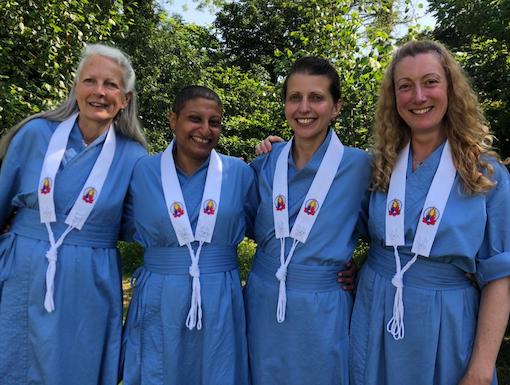 After months of waiting for an easing of covid restrictions, we’re in the midst of a summer of celebration as members of our community mark significant stages on their spiritual paths.

We put a high value on spiritual friendship, or Kalyana Mitrata, in Buddhism, and it’s important to us to mark the close connections that support us in treading the path. The very joyous occasion of Cia Vinten’s Kalyana Mitra ceremony was held here in the Vajra Hall on 1st July. In a simple and beautiful ceremony, Maitrinandi and Acharashraddha, Cia’s Kalyana Mitras or spiritual friends, rejoiced in Cia’s many merits and committed to sharing this lifelong journey with her.

It was very moving to hold the ceremony in the Buddhist Centre, and particularly special that Kalyanaprabha was the celebrant. She has been a long standing friend of Cia’s for over thirty years, and was also Manchester’s first Women’s Mitra Convenor.

The word Mitra, or friend, is also used for someone who has made a preliminary commitment to their practice within our Triratna Buddhist Community. After a long uncertain period, it was wonderful to witness Ellen, Juliette, Lizzy, Michael, Stephen, Dean and Ivan, taking this step in July in the Lotus Hall, with Order members who know them well leading the afternoon. This time, some of the Mitras’ families and friends were able to join us in the shrine room, with everyone else cheering them on in large numbers through Zoom.

And also at long last, five women from our local community have been ordained into the Triratna Buddhist Order this summer at special retreats across the country, organised with great ingenuity to ensure safety in pandemic times. We recently welcomed back Taramaitri, ex-Debbie, in a warm and inspiring evening broadcast live from the Centre, but have to wait until October until we have Taralocana, Aryaraksita, Sripaksini and Lilasuri, previously Lynne-Marie, Sundeep, Helen and Claire, all together in one room to tell us about this major step they have taken.

The Centre's reception and shop are open 11am - 3pm on Tuesdays, Wednesdays and Thursdays ,and 10.30 - 2.30 on Saturdays. Many events, classes and activities are online for now, so do join us there too. Join our mailing list to stay up to date, or keep an eye on our news page and social media. Please check Bodywise's website for their separate opening arrangements. Charity reg no: 514937