Changes to the Buddhist Centre Team 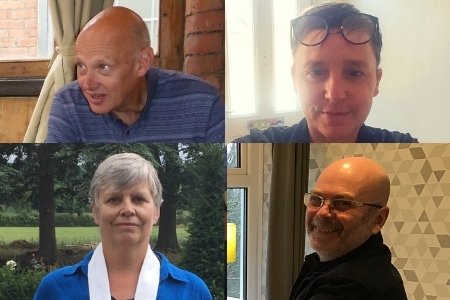 During the next couple of months, we will be seeing lots of changes to the Buddhist Centre team.

Firstly, Moksavadini will be retiring from her role as Finance Manager at the end of May, after working in the role since 2012. During her time in this role she has been a dedicated, passionate and reliable member of the team. She has introduced a wide range of systems which have helped the financial management of the Buddhist Centre to run much more smoothly. Although this is quite an unglamorous job to many, Moksavadini’s work has been vital to keeping our Centre open and afloat!

She will be replaced by Buddhasamagama, one of Manchester’s newest Order Members and long-term resident of the Akashaloka community. He will be bringing his characteristic enthusiasm, love of detail (even spreadsheets!) and dedication to the sangha, to the role.

At the same time as Moksavadini, we will see the end of Sal‘s time in the team. Sal has worked as the Dana Project lead, responsible for fundraising, since 2017. Sal has overseen a number of major fundraising projects which have enabled some significant improvements to our Centre. She has also been a kind presence in the team with a great sense of integrity.

We currently have a fundraising campaign for Sal and Moksavadini, to thank them for their years of service for the Centre and to wish them well in this next chapter of their lives.

A month later, at the end of June, Chandana will also retire from his post as Centre Manager. Chandana has been part of the team since 2009, working in various roles before becoming the Manager in 2018. His quietly positive presence in the team and his characteristic wit have been greatly appreciated during his years as a stalwart presence in the team. Despite retiring, he will continue to contribute significantly to the life of the Centre as he will be jointly responsible for overseeing the development of teaching at the Centre.

All of us at the Buddhist Centre wish all of our team members, both those joining and those leaving, all the very best.

The Centre's reception and shop are open 11am - 3pm on Tuesdays, Wednesdays and Thursdays, and 10.30am - 2.30pm on Saturdays. Some events, classes and activities are online for now, so do join us there too. Join our mailing list to stay up to date, or keep an eye on our news page and social media. Please check Bodywise's website for their separate opening arrangements. Charity reg no: 514937